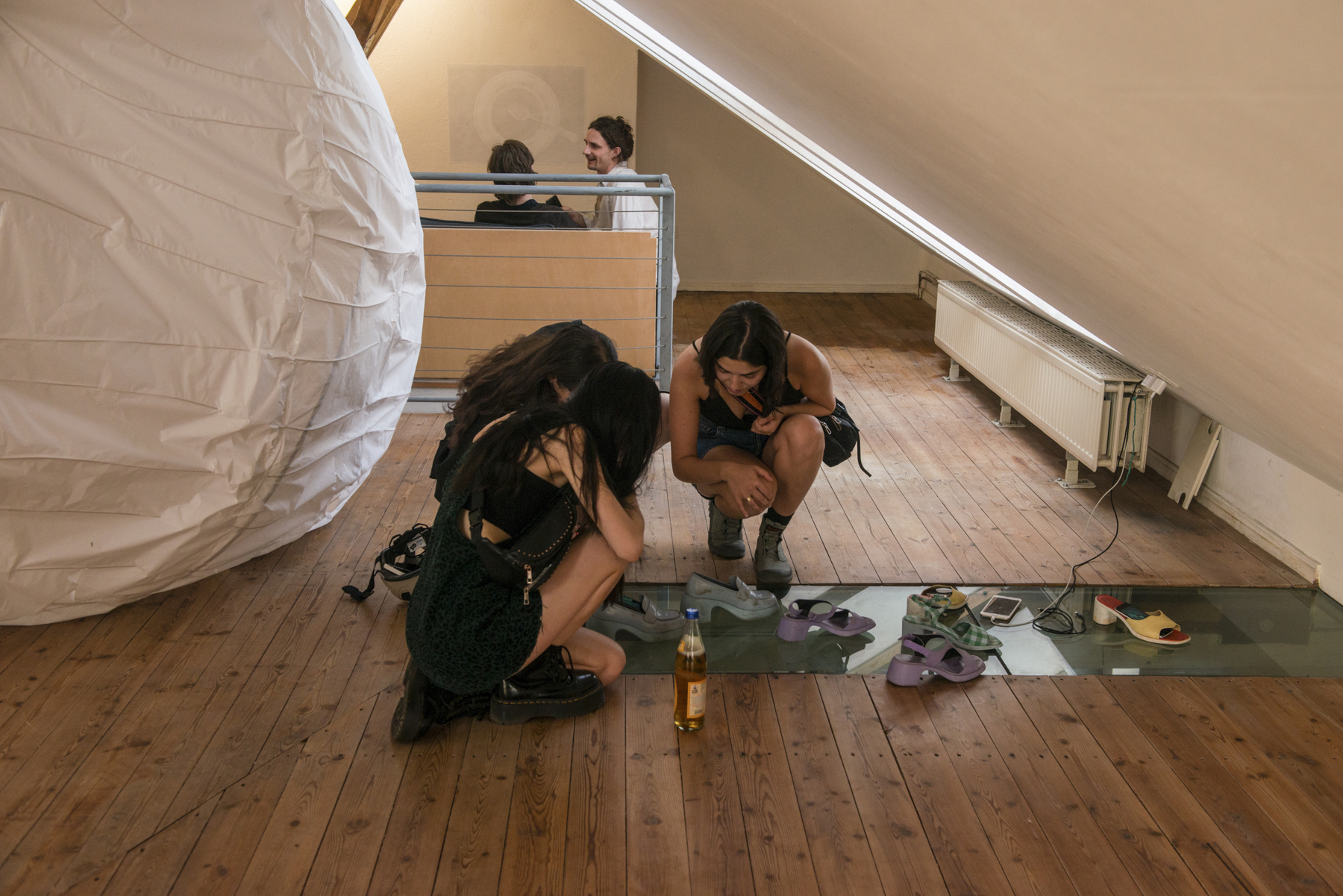 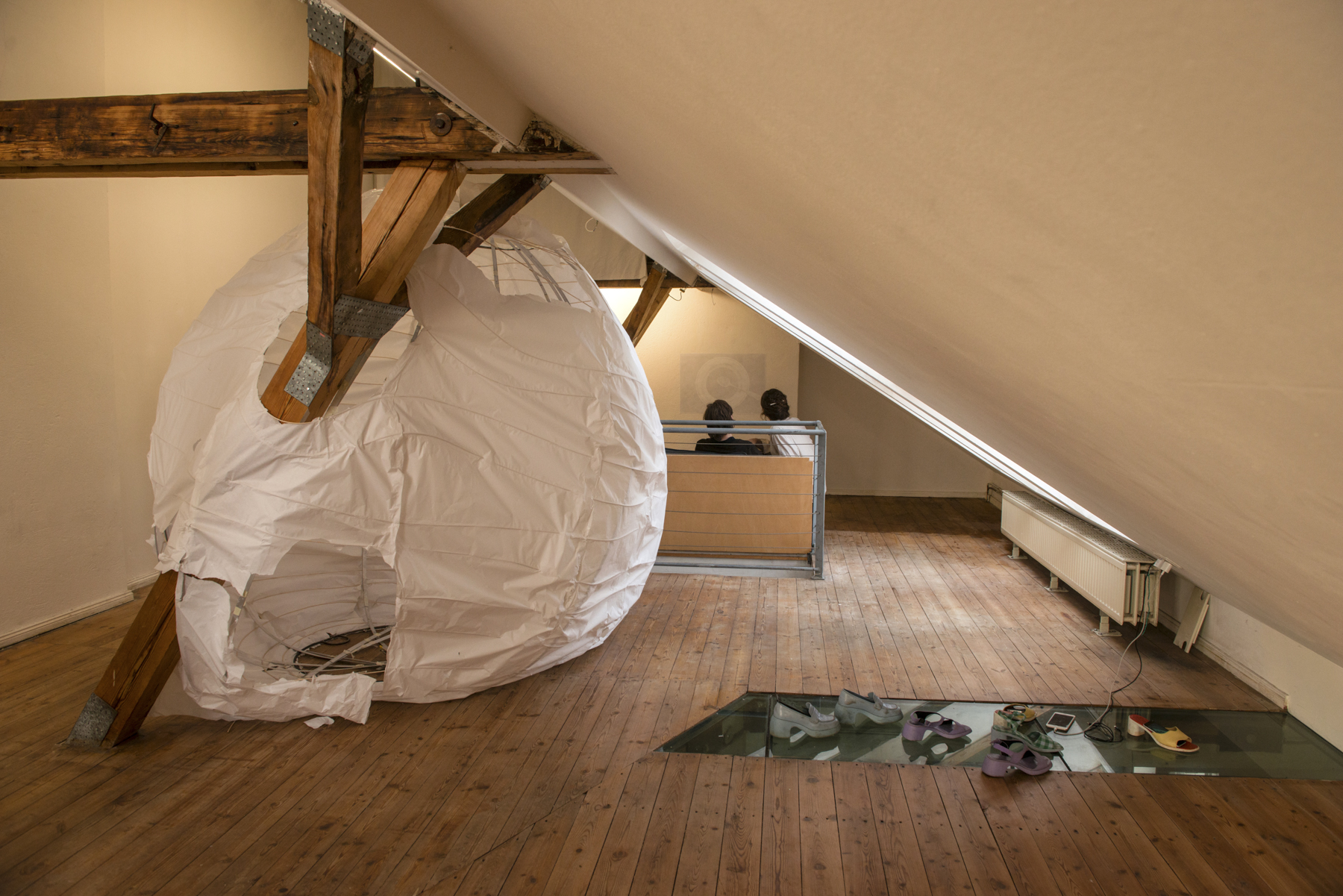 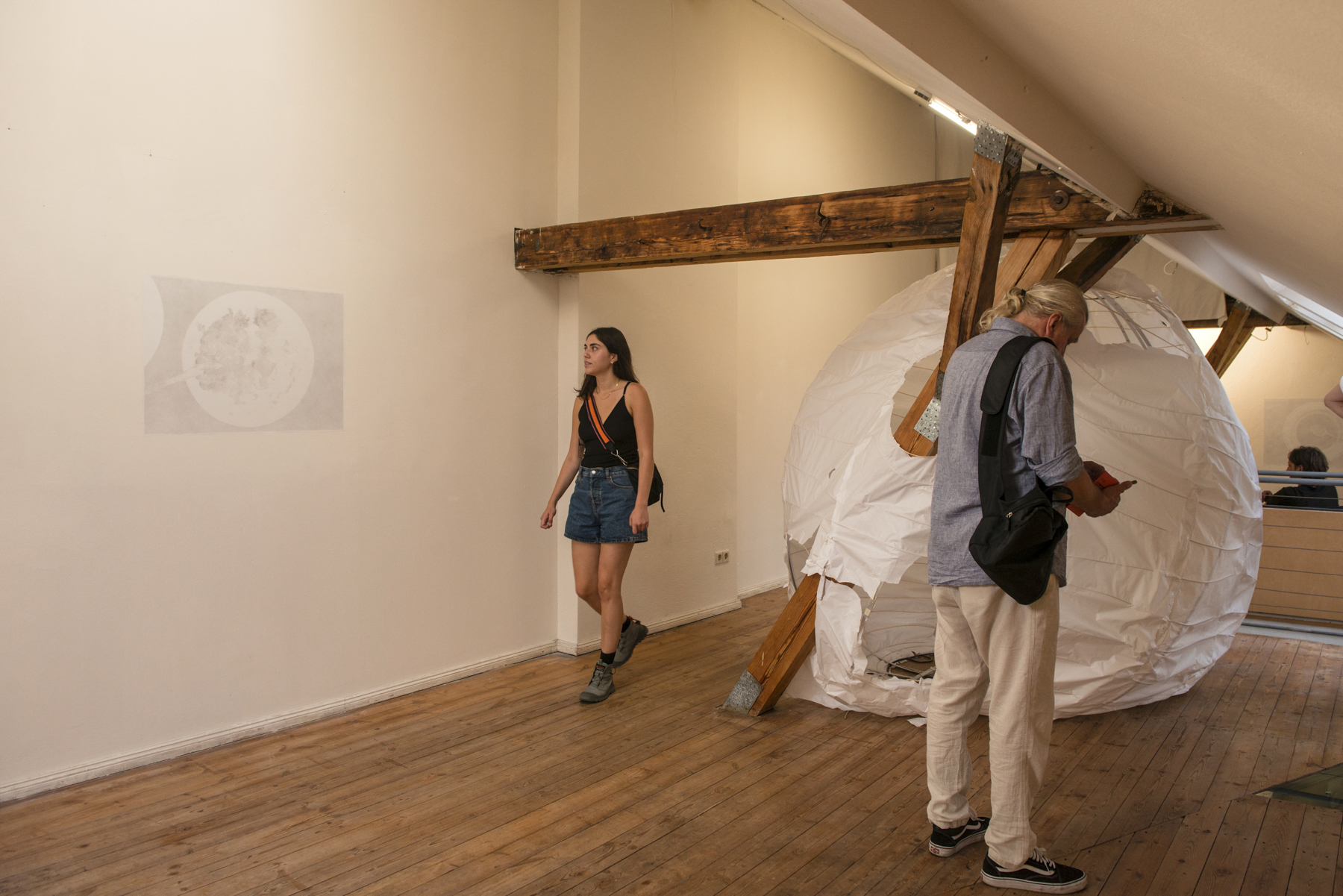 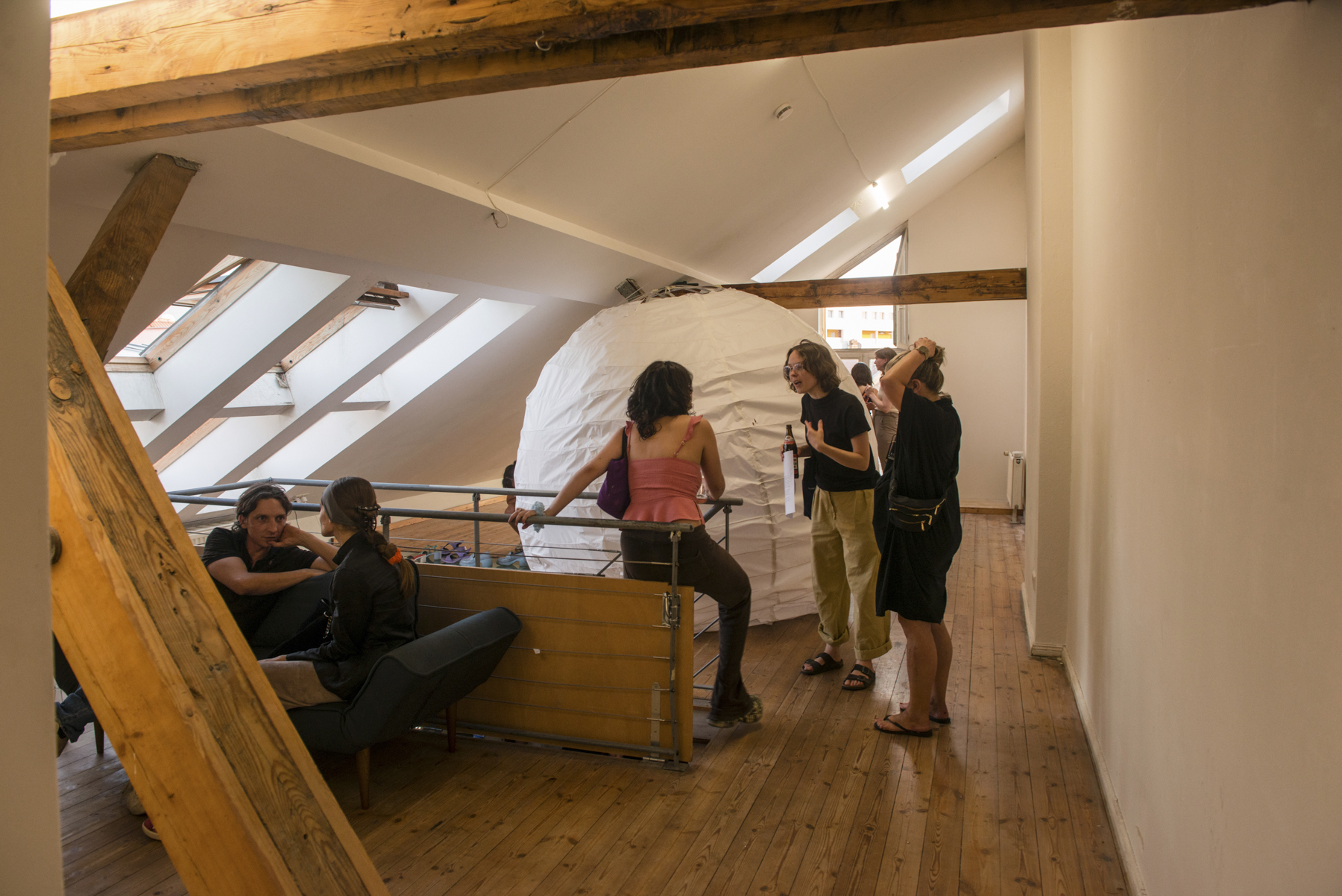 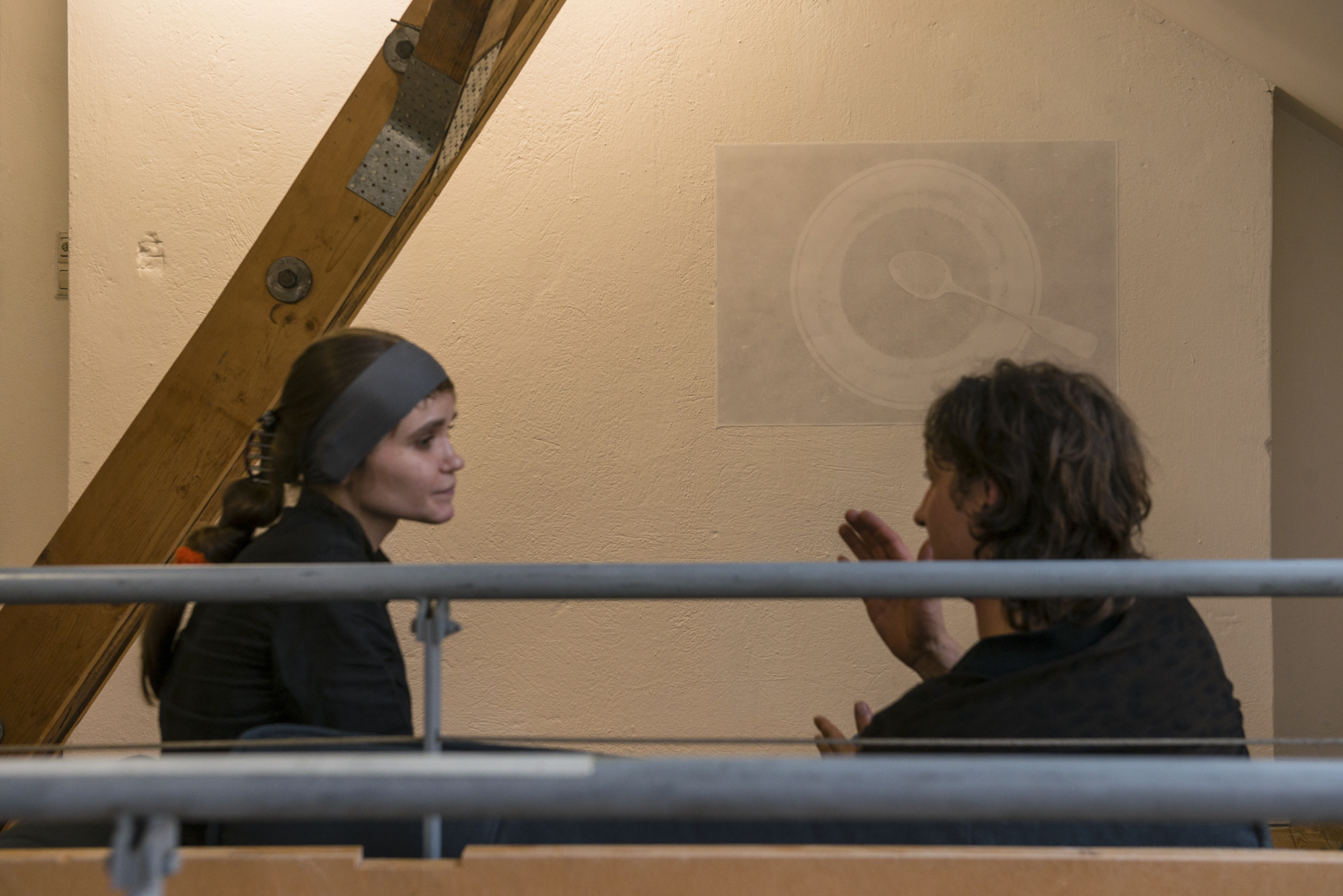 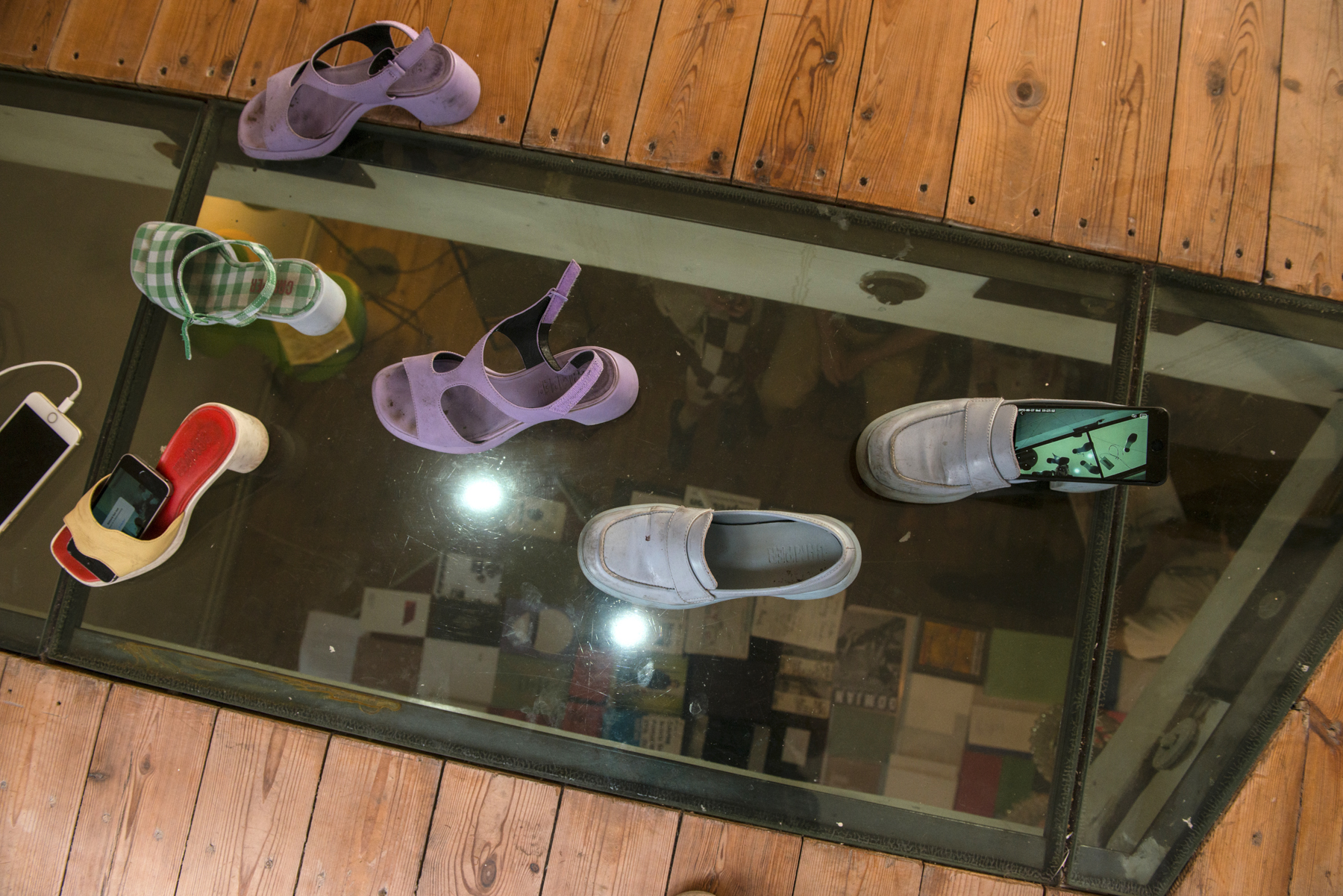 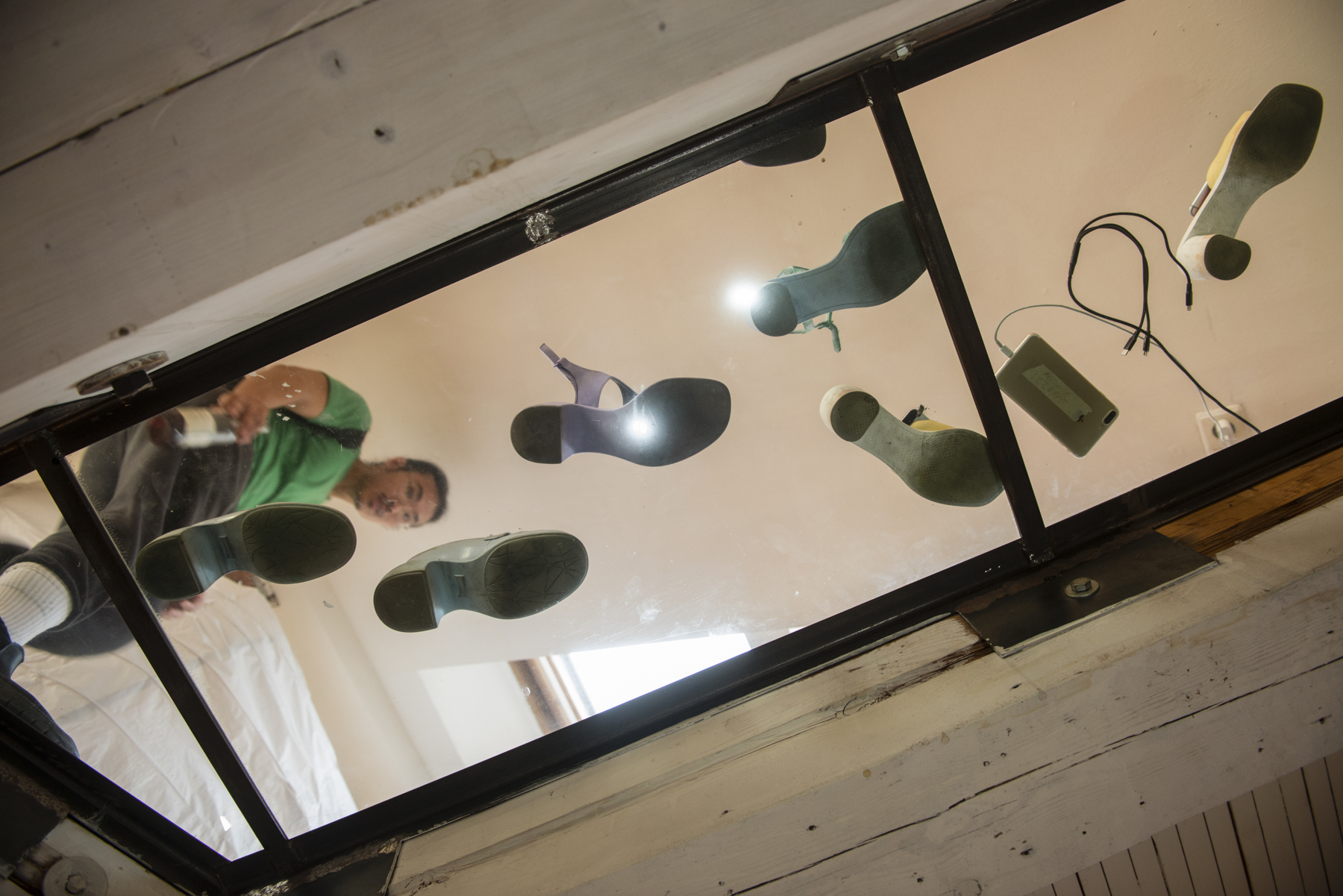 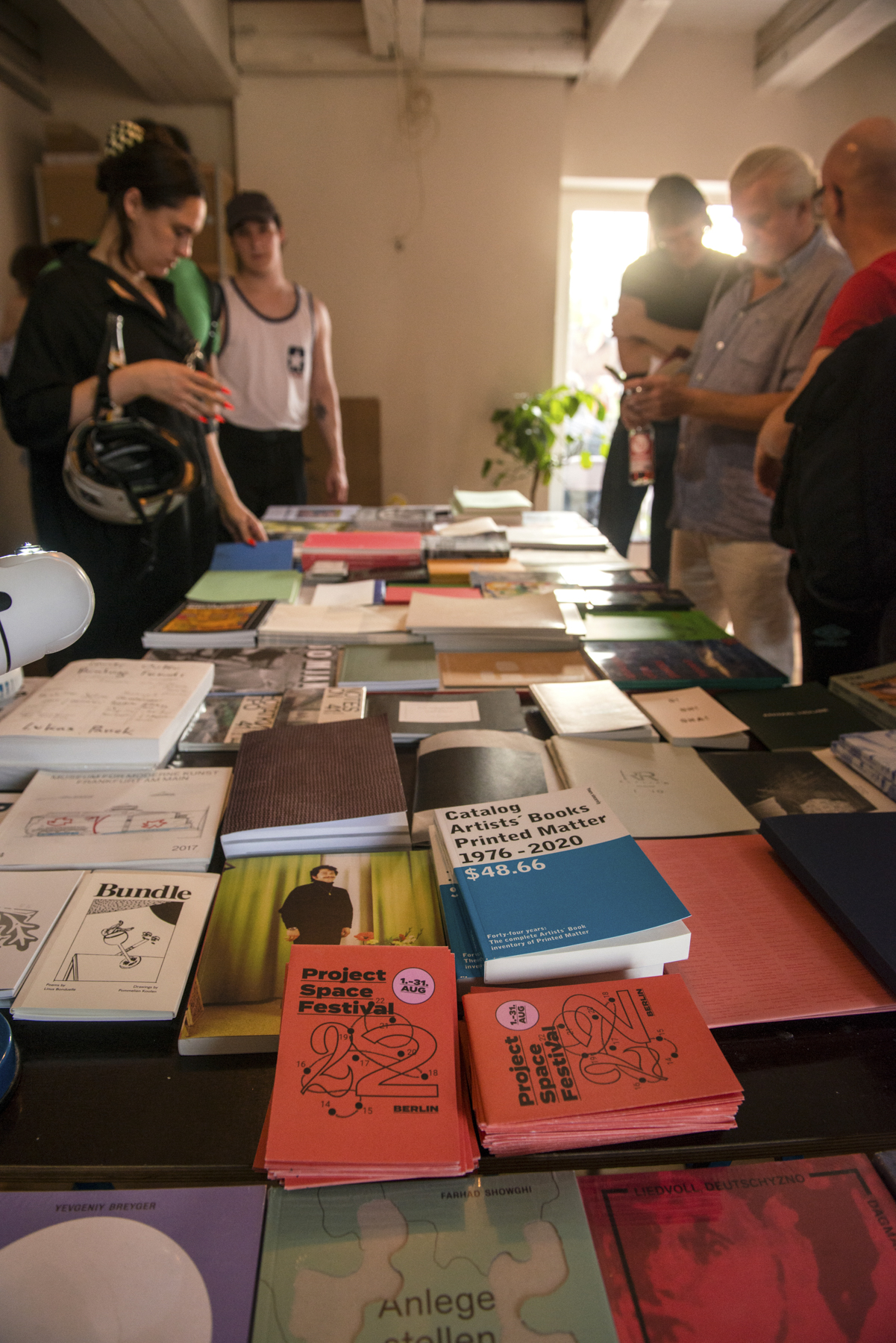 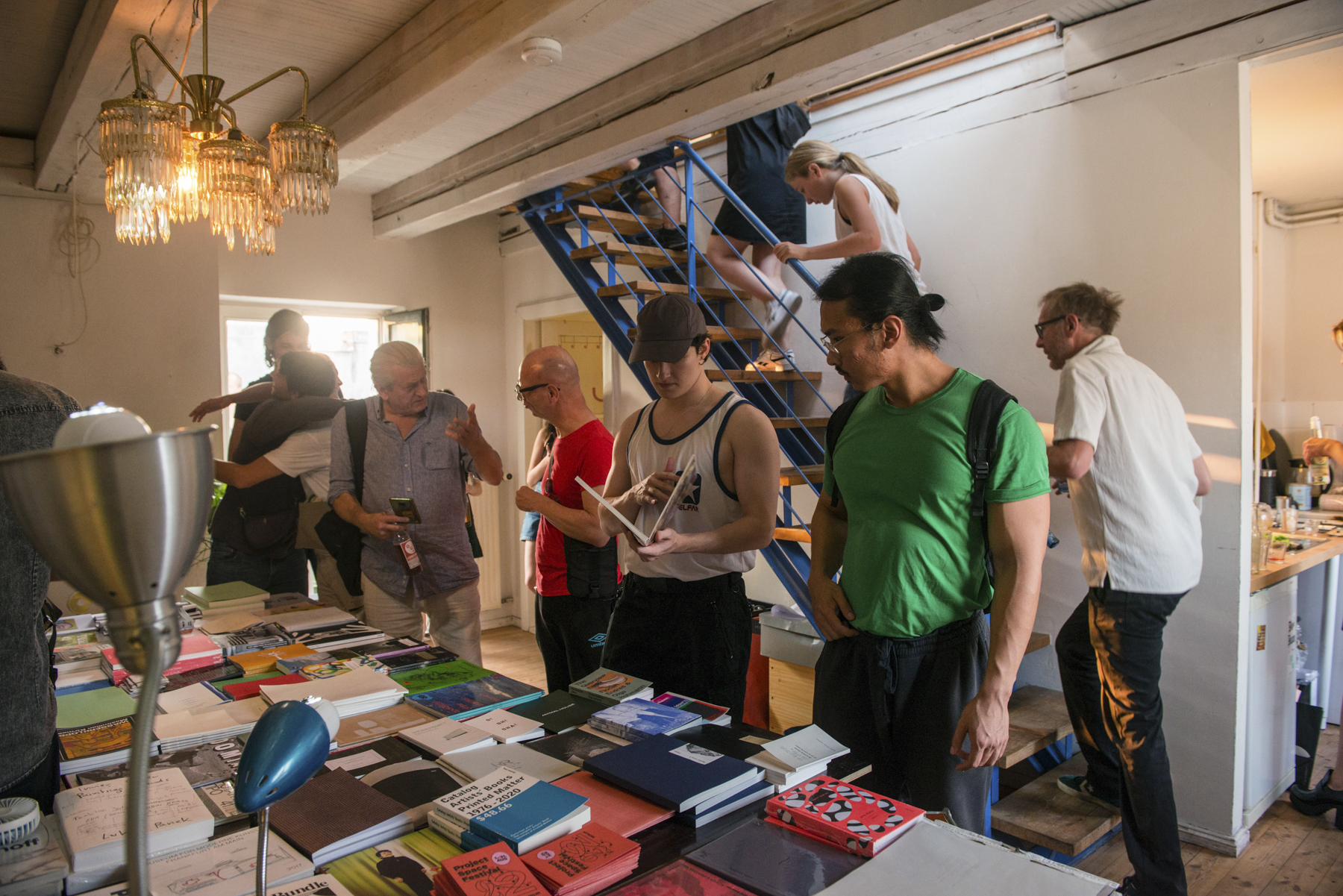 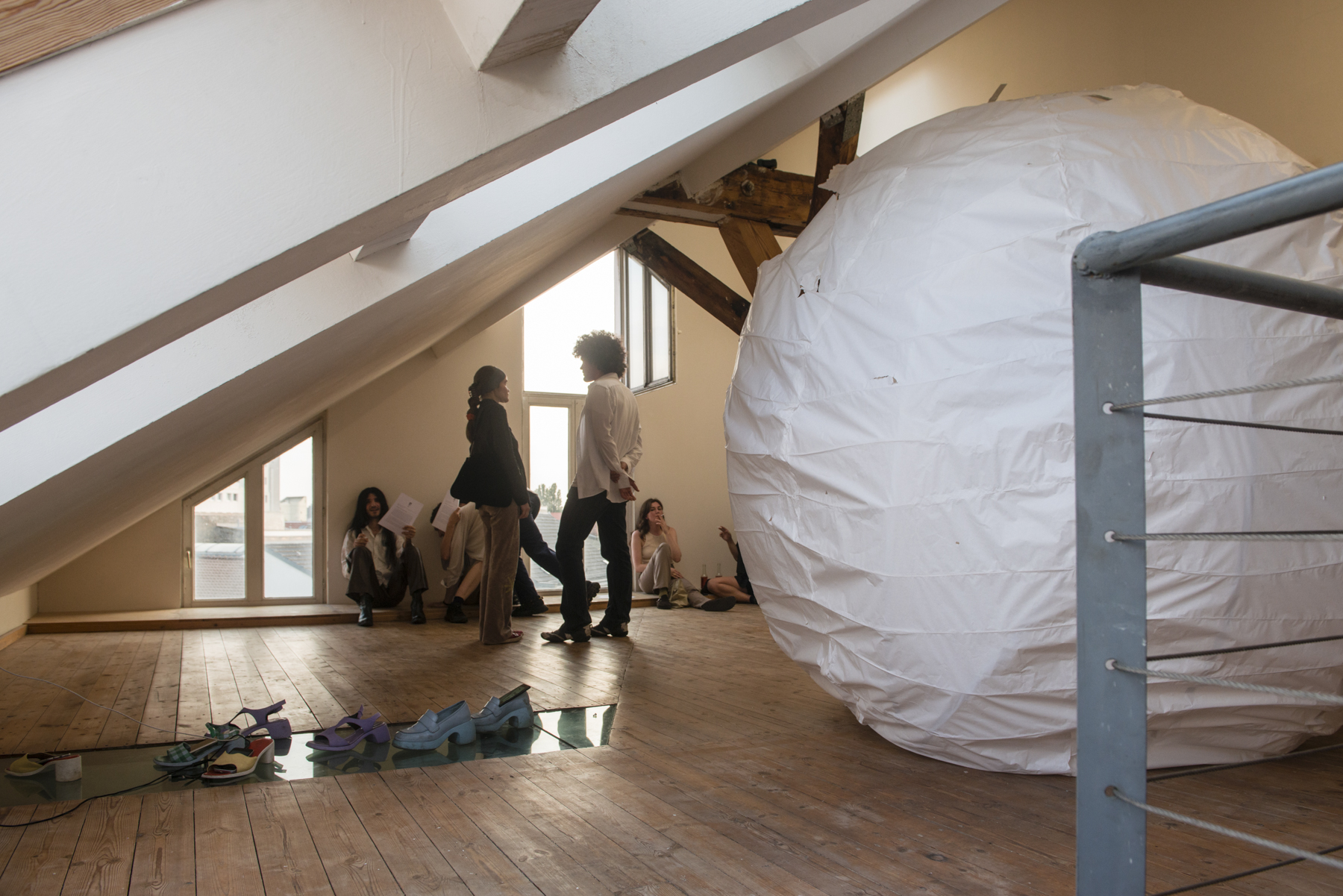 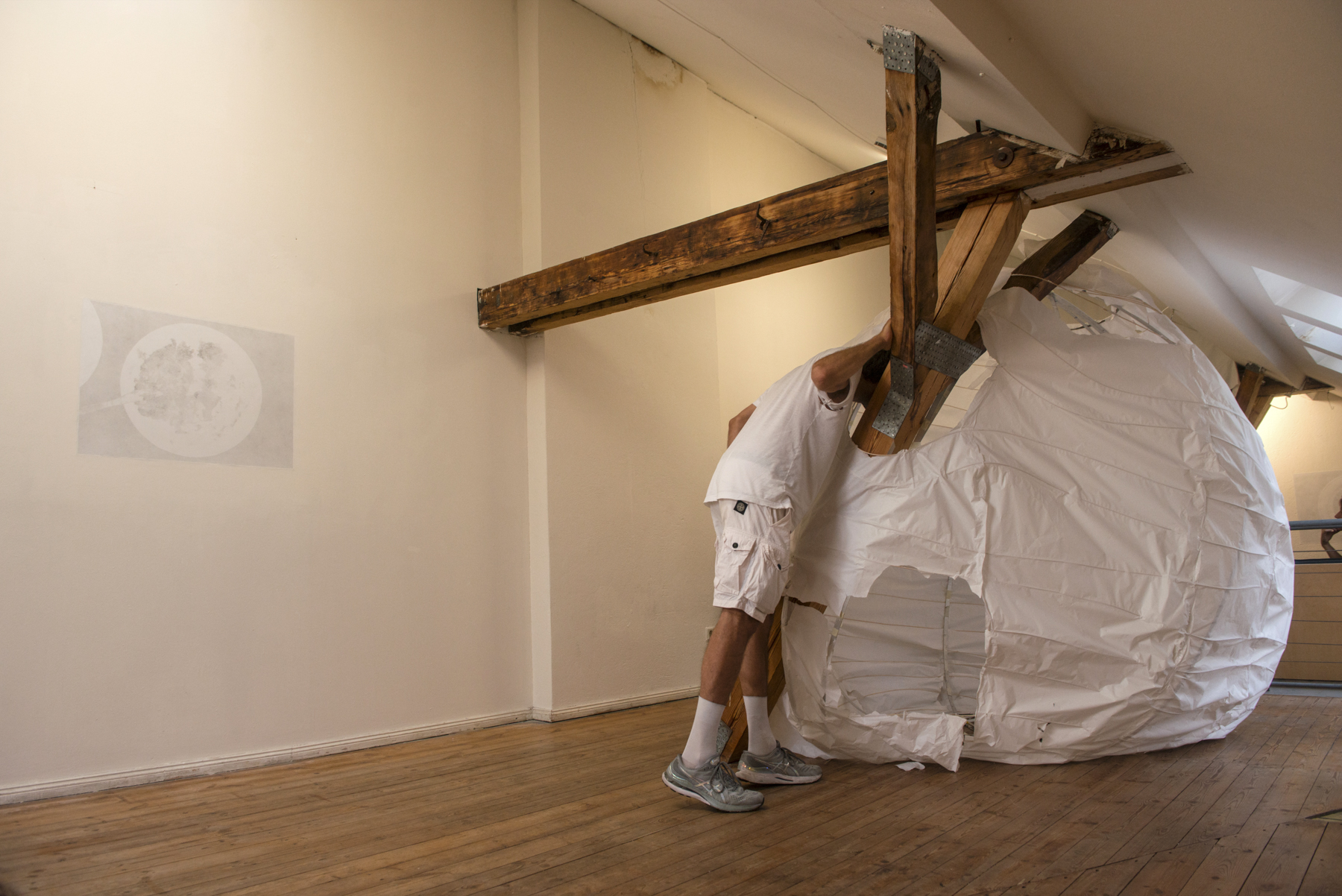 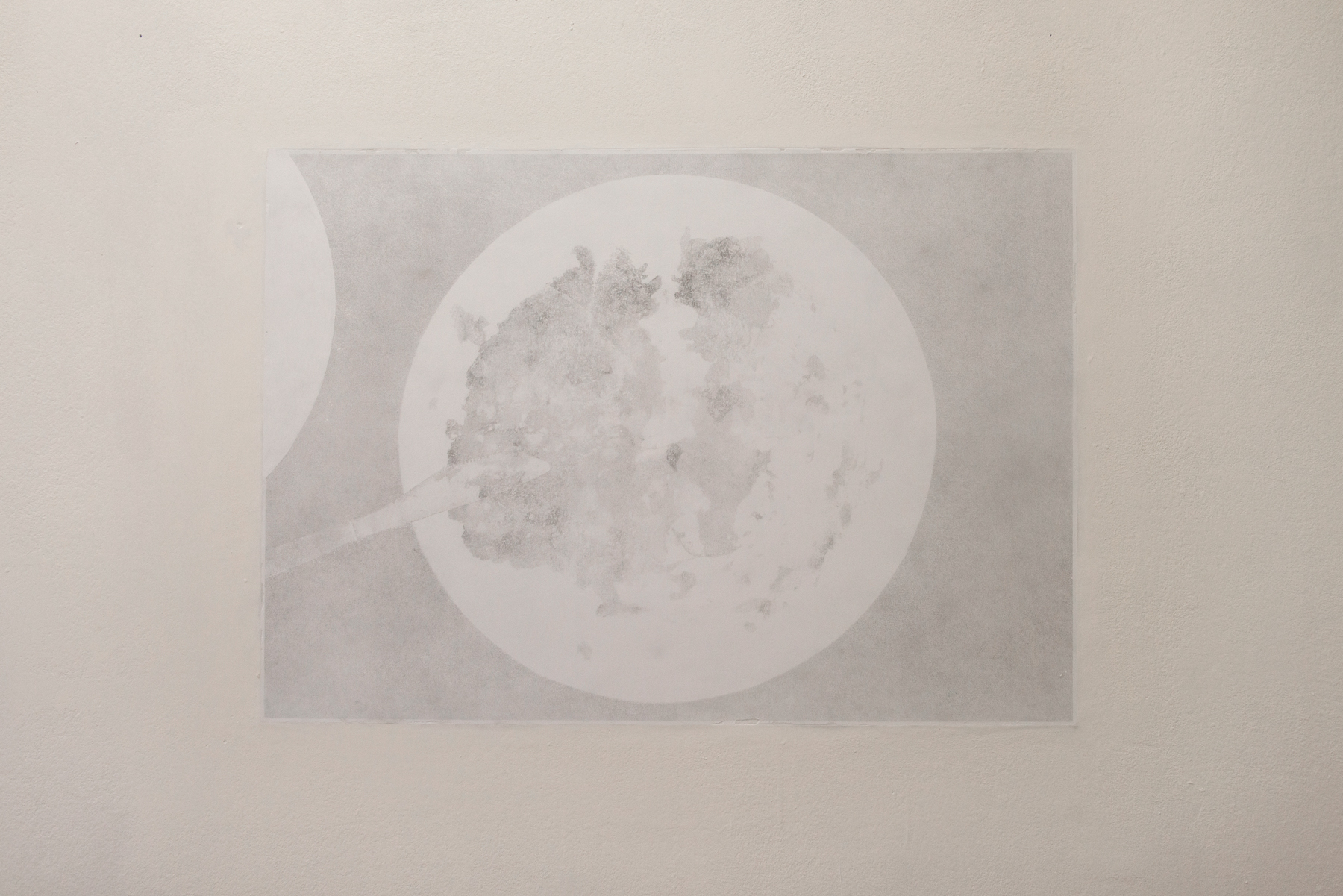 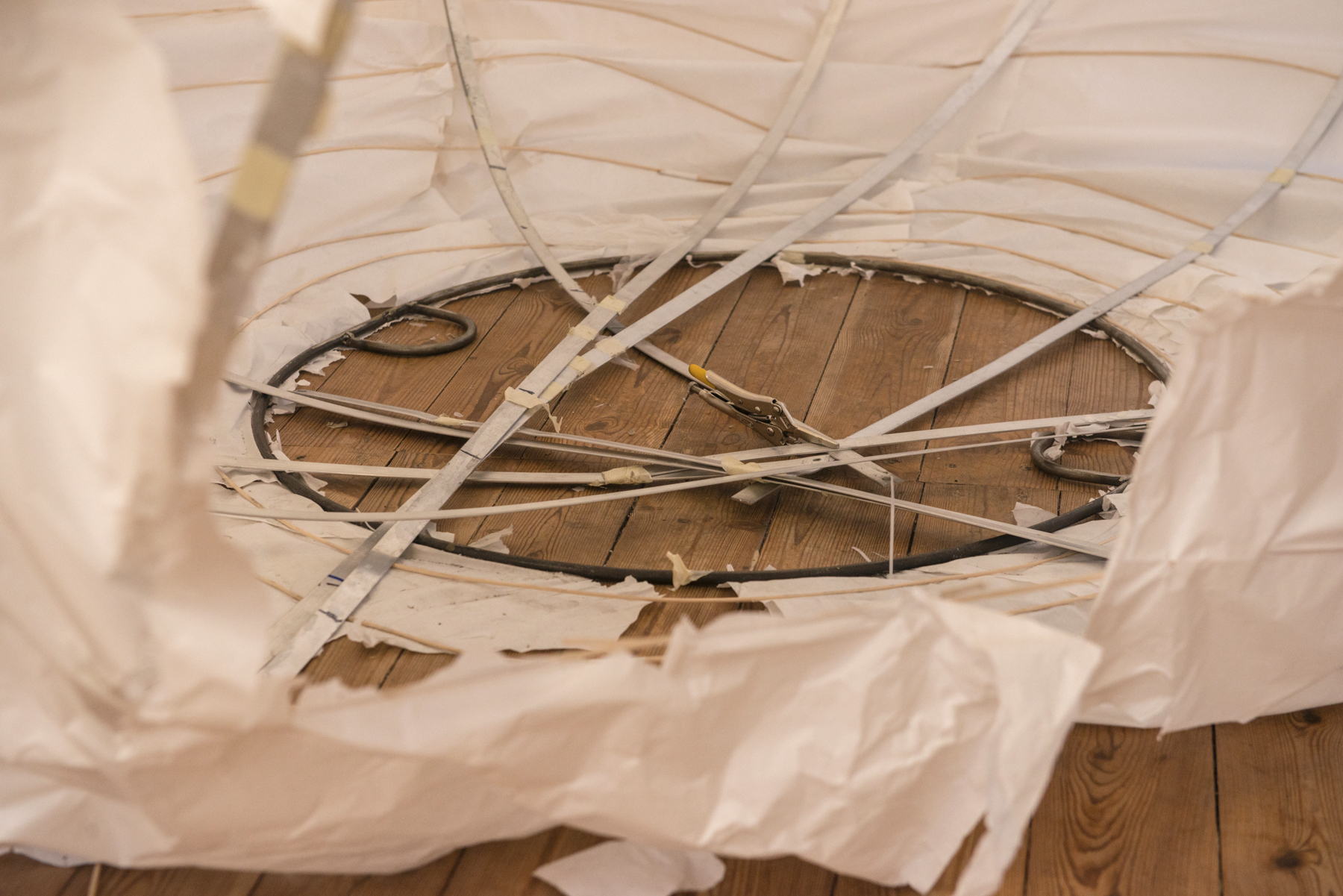 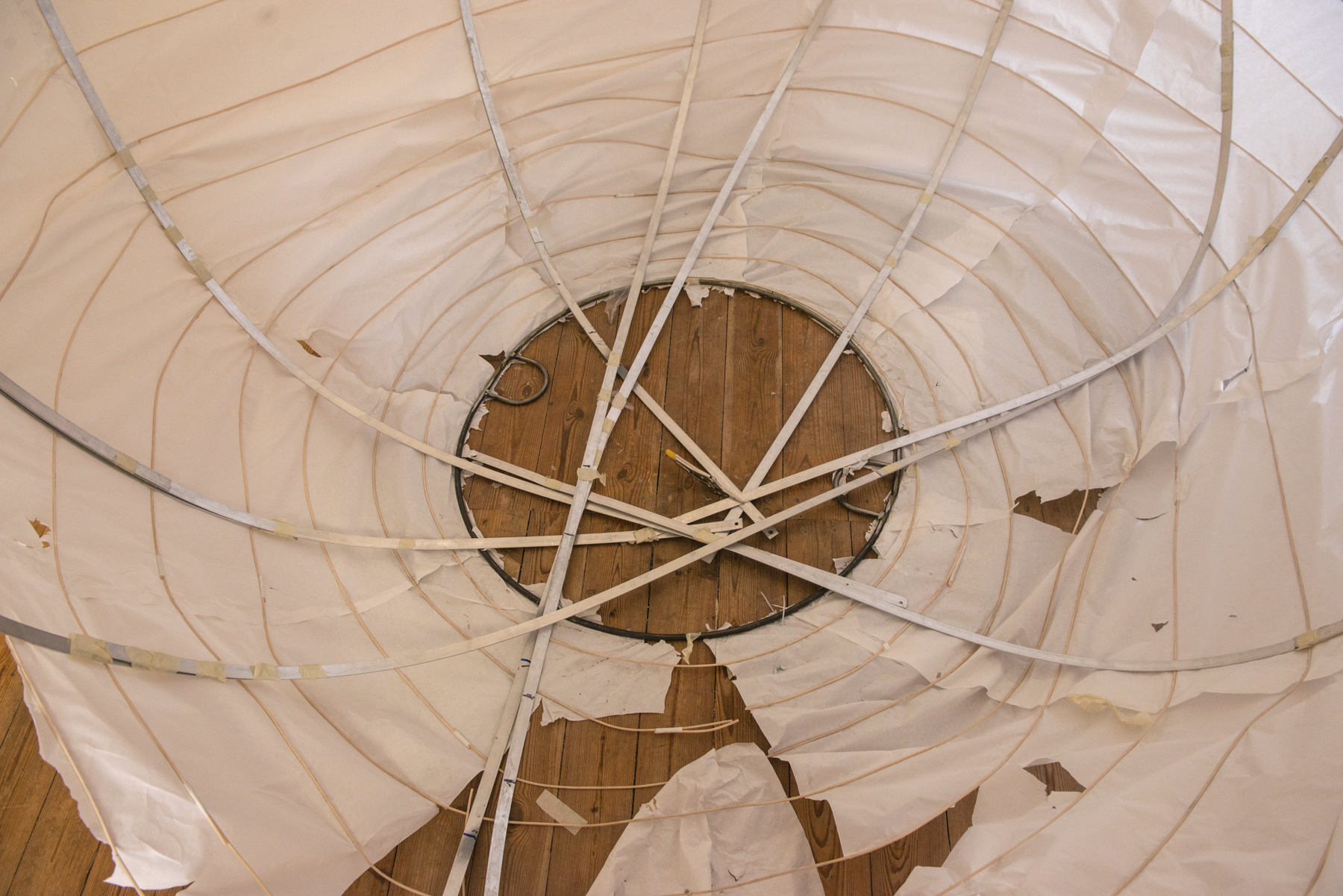 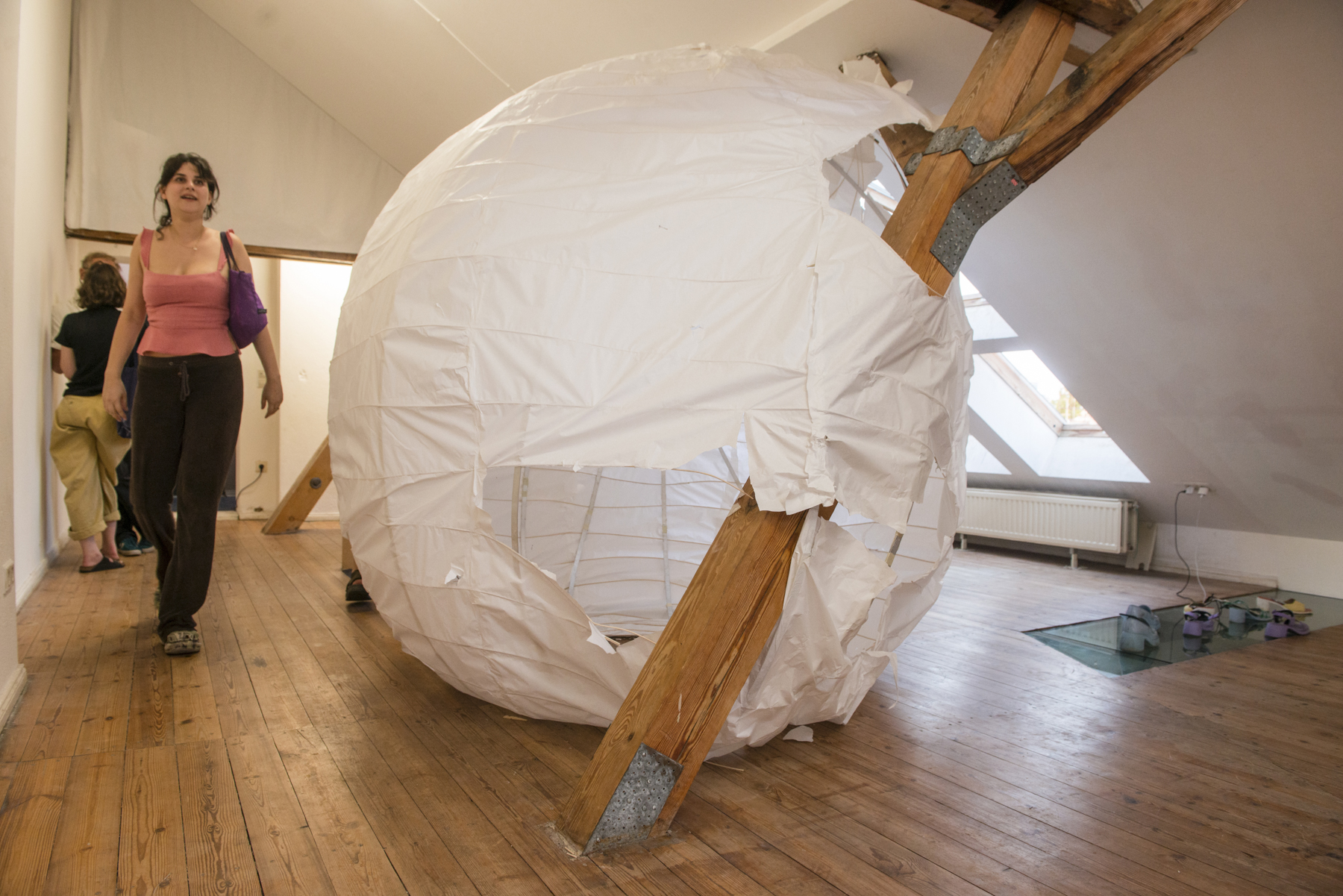 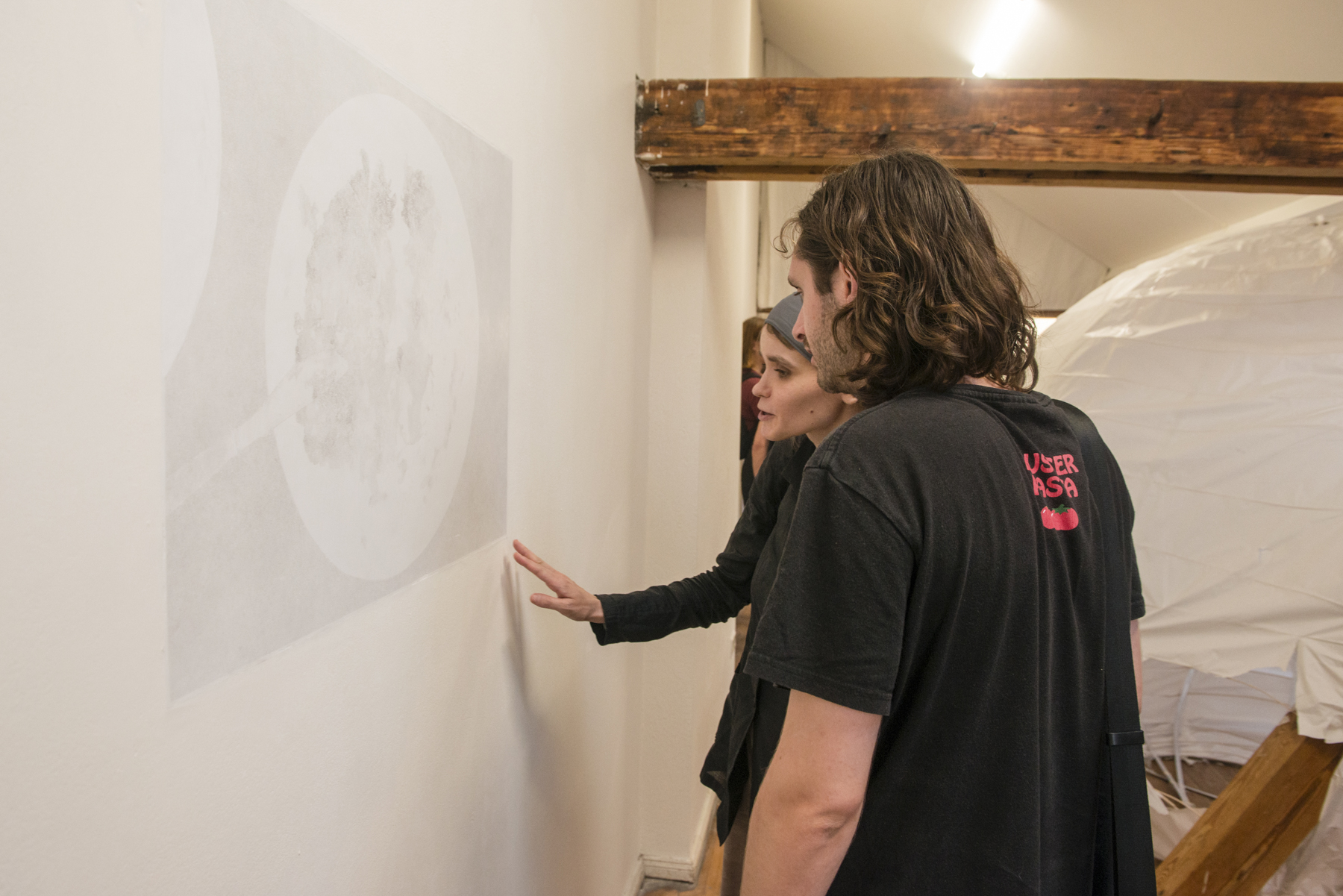 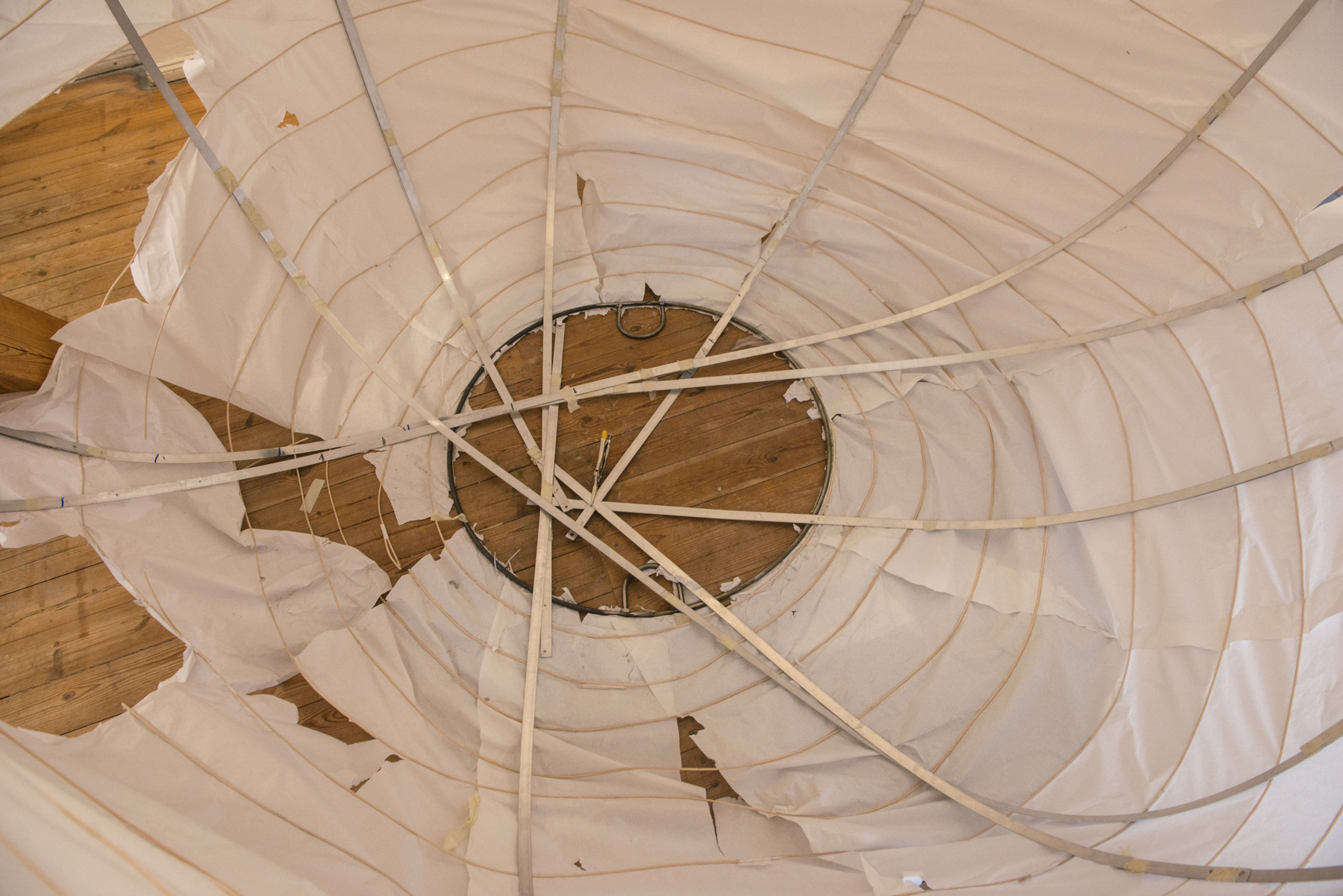 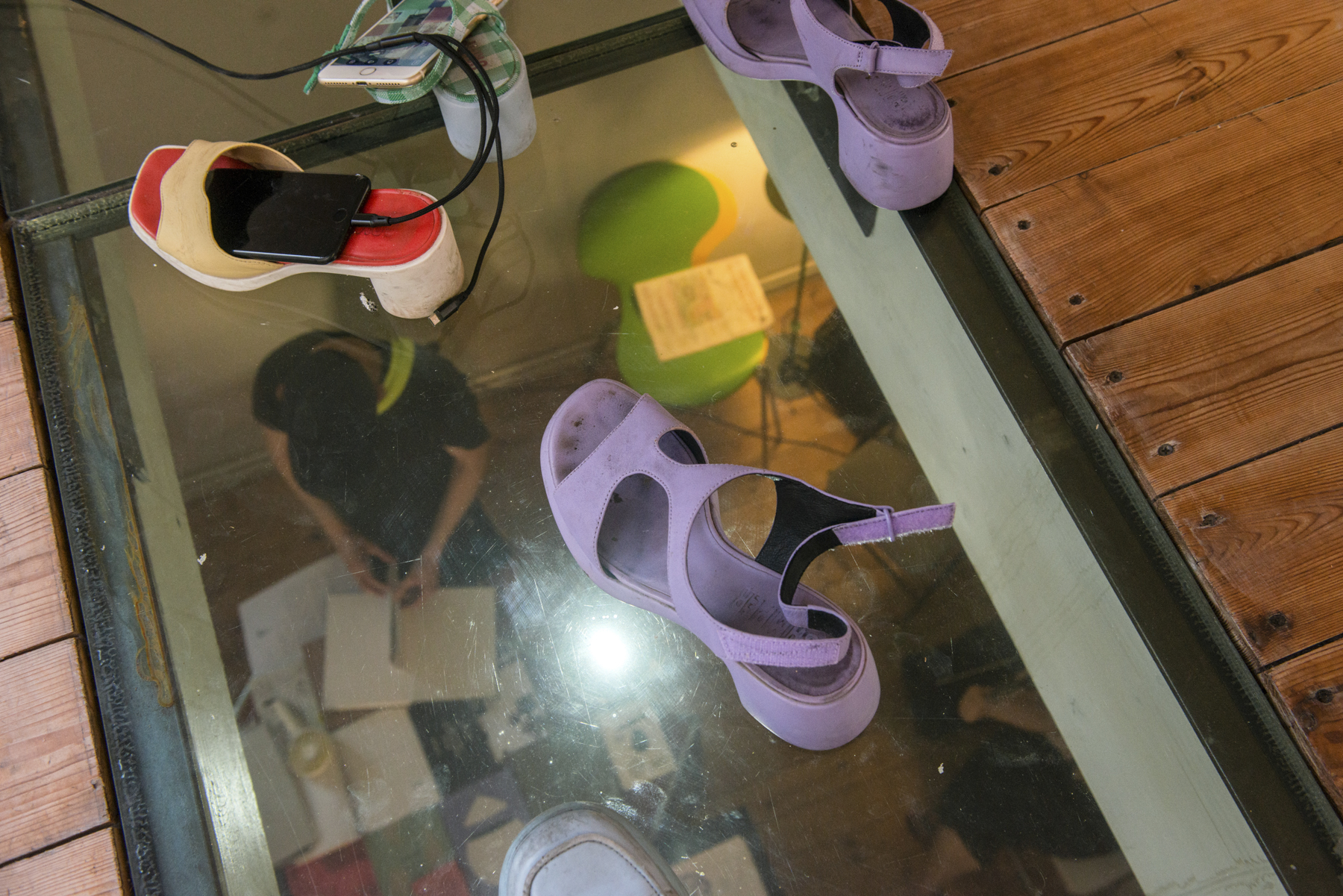 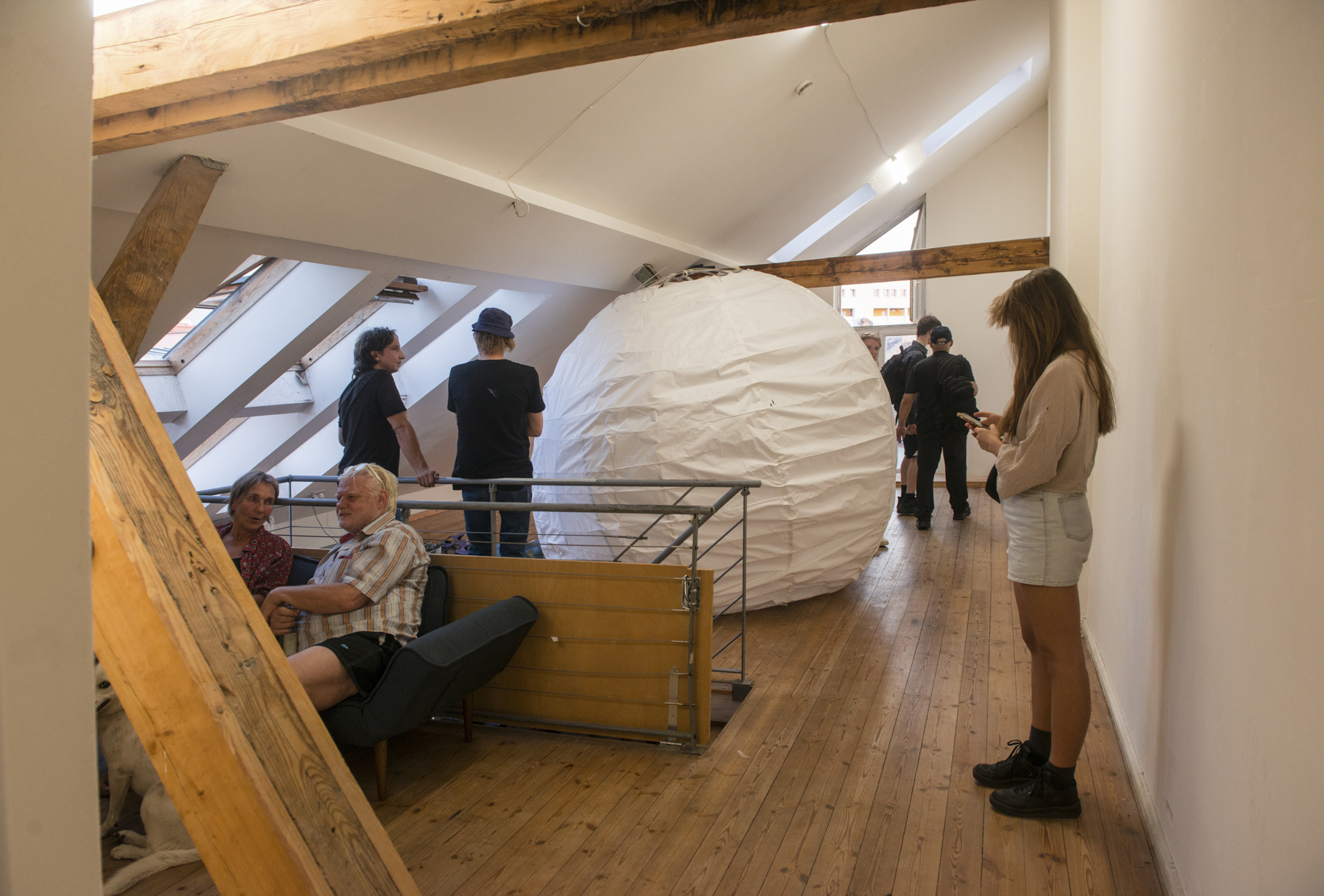 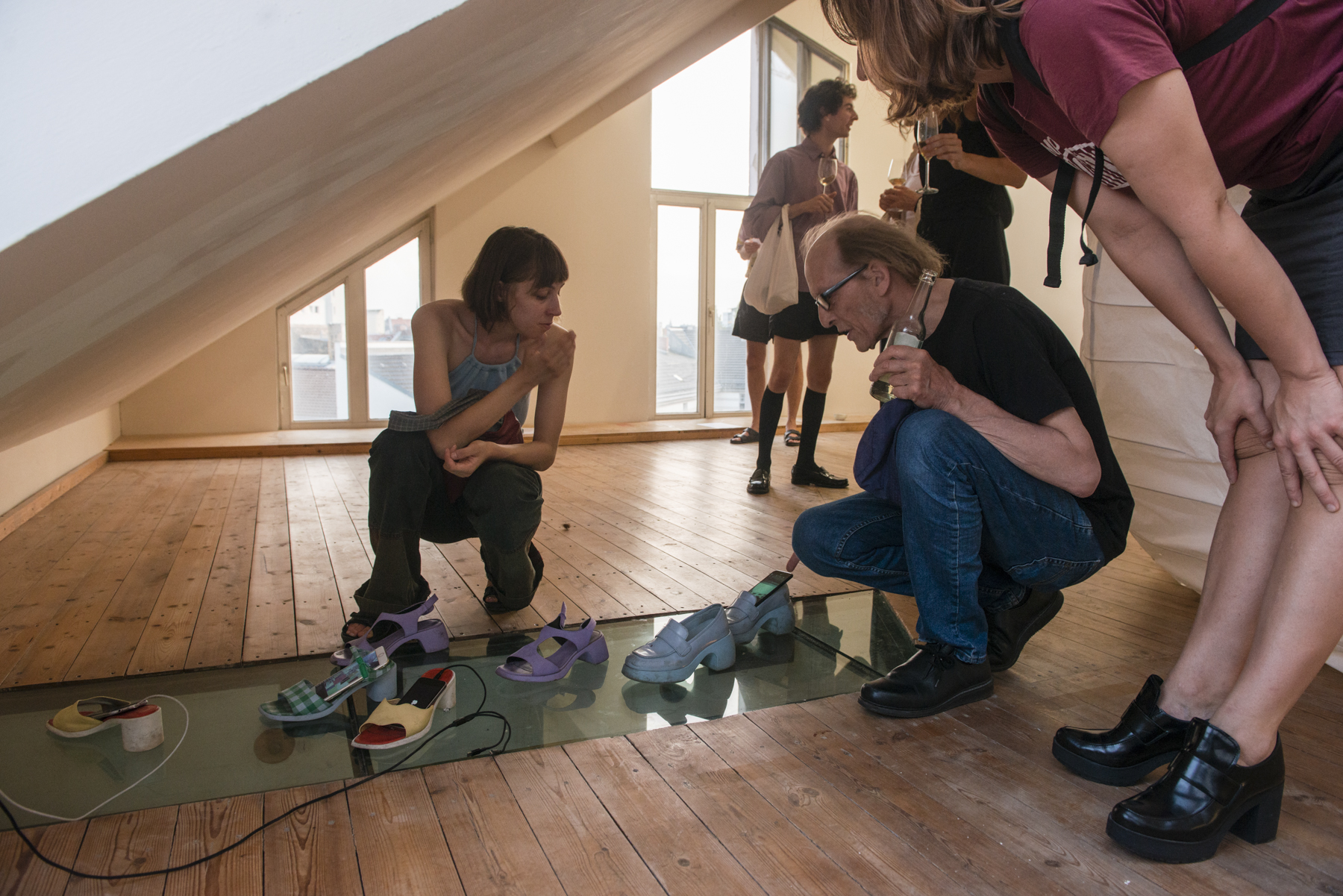 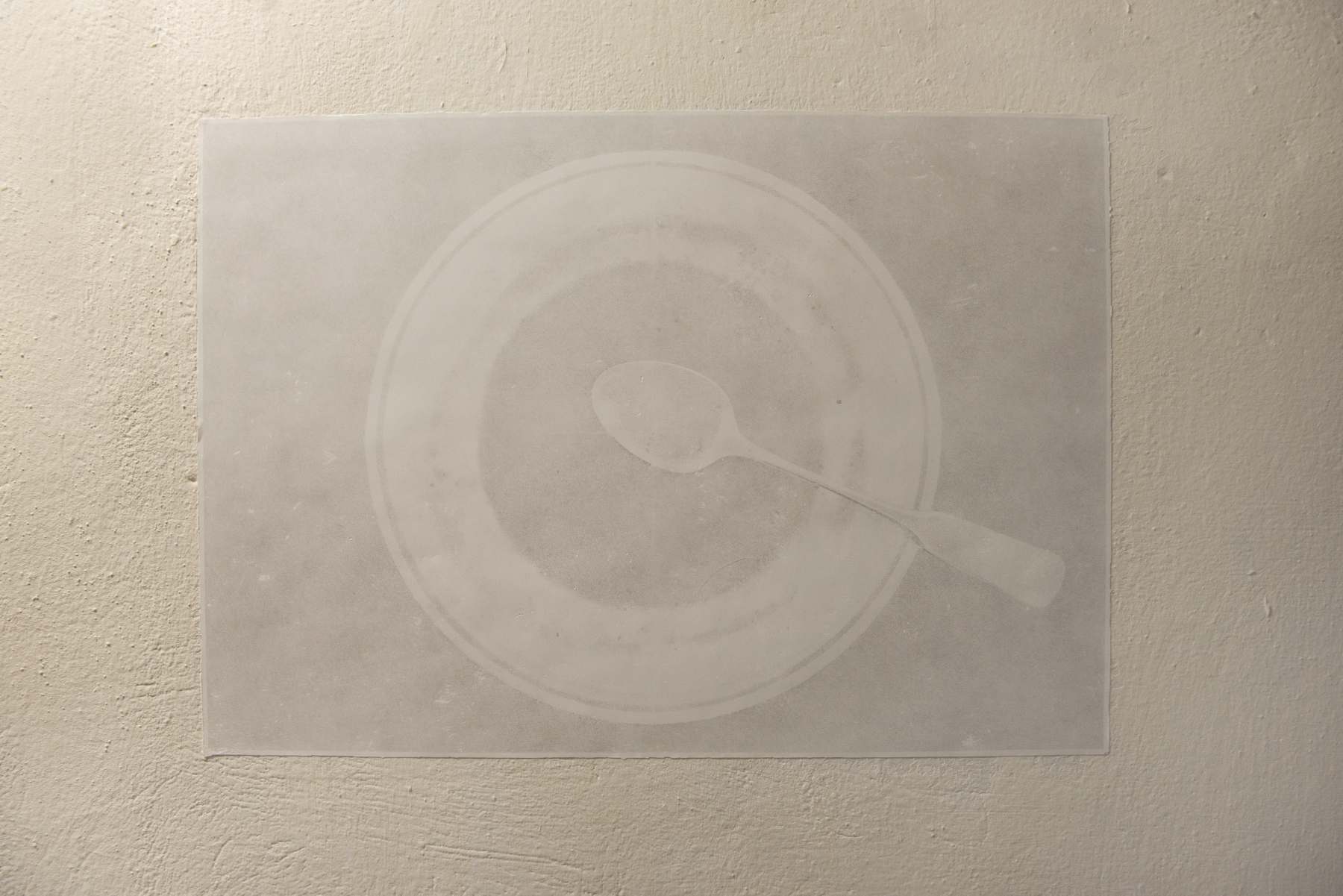 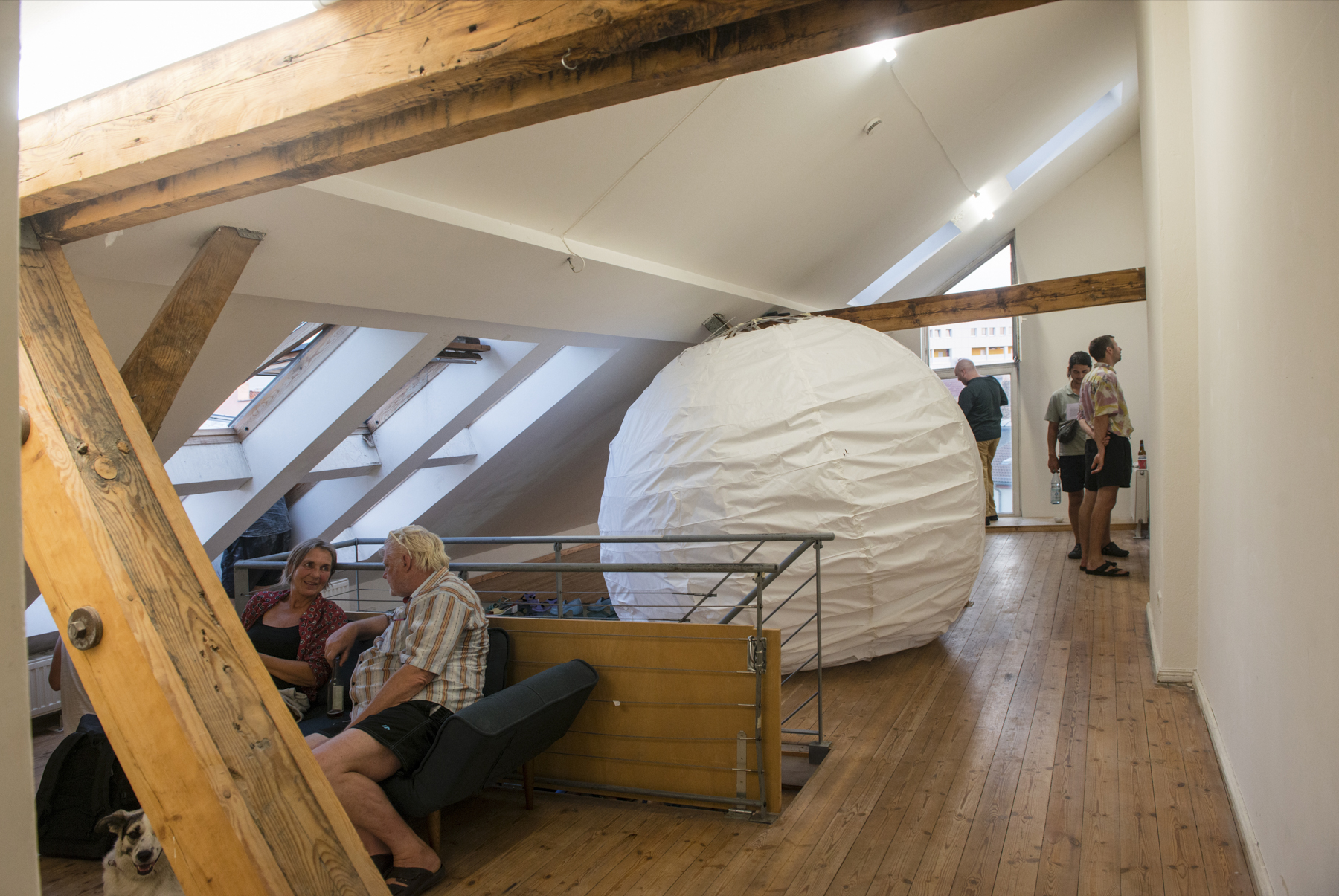 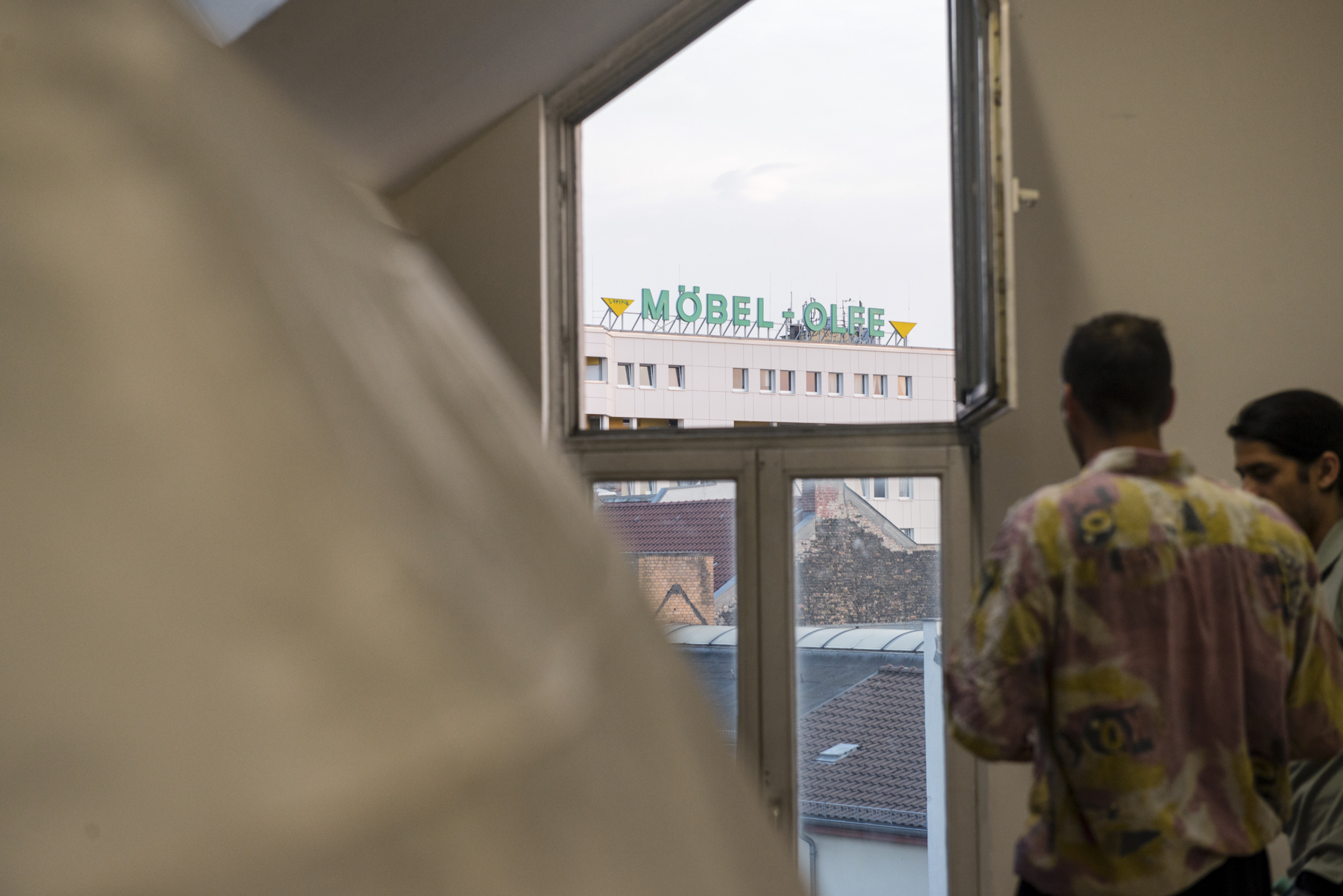 Medium P is an exhibition space that made its start in 2019 in Frankfurt am Main. The off-space was a replica of the Portikus Kunsthalle, made for an exhibition at the museum. The scaled-down copy of the established institution was then transformed by Antonia Lia Orsi into its own autonomous exhibition space, placed directly in the parking lot of the Städelschule. Since 2021, Medium P has become a wandering exhibition space, which first took up another social dispositif with projects such as the Medium P Community Pond ( an exhibition in a self-built pond) in Frankfurt am Main - and in turn created a new template for encounters. In December 2021, Medium P opened its new location in Berlin Kreuzberg with the exhibition "Soul-Mating Fatigue" by Zoë Field. The location is a kind of historical utopia: an affordable,120 square meter rental apartment on two levels in the center of Kreuzberg. With the choice of this location, Medium P playfully poses the question of the institutional and the social. The off-space humorously plays with the question of (self-)institutionalization. Its slogan is: Medium P. An Honest Institution.

Upstairs, Nik Geene's expansive paper installations are united with Maria Cozma's acetone prints. Nik Geene's ceiling-high paper objects (in the style of collapsible paper lampshades) must be entered to reveal Maria Cozma's work through cracks in the walls: A photo print attached directly to the wall using a rubbing technique. Here, the questioning of one's own perception becomes the connecting element of the two positions, in that the wall works appear disjointed in a similar way that one's own body appears to the perceiving subject: as a conglomerate of unconnected limbs, in which only the (seeing) head remains invisible (to itself).

The Medium P Media Group Bookshop is an installation that exploits a disappearing commercial enterprise—the bookstore—as a means of indexing the wide-reaching social ties that constitute artistic life. In a moment when “print” is supposedly dying in favor of flashier forms of media, our own media agency relishes in the vitality to still be found in published books. Rejecting the authoritative posturing of most bookstores, our own Bookshop is unapologetically personal and biased, collecting together the publications of friends, friends of friends, people we want to know better or people who’ve for whatever reason struck a chord. The entire installation is continually surveilled by a group of security light bulb cameras, with the footage being displayed on phones in the upstairs gallery space—linking the two projects while highlighting the performativity of consumerism. The Bookshop is the latest in a series of projects by Medium P that mimic the programming of actual institutions in a tongue-in-cheek manner, thereby parodying the conventions of art institutions and forming a wry update on the by-now canonical genre of institutional critique. The Bookshop has also become an impetus for a number of artists to create unique limited-edition publications. Within a purportedly capitalist structure, we make a snapshot of a scene, a library of artistic moods, a mapping of fleeting thoughts and notions.